* This story has not been adapted to cellphone screens yet *

AUSTIN, Texas – April 20, 2021 – Social media created the #vanlife hashtag with images of secluded landscapes, well-designed van spaces and memes with phrases like “less comfort, more life” and references to Jon Krakauer’s “Into the Wild.” Nomadland, the Oscar-winner movie starring Frances McDormand, tells the story of a widow who decides to leave her stationary life and travel through America in a van named Vanguard. These prominent media depictions of #vanlife and a burgeoning social media community are spreading the phenomenon across the nation.

With help from Wi-Fi technology, social media, the mini-house movement and the advent of the pandemic, the vanlife movement has expanded greatly in the past year. The trend involves a great deal of mutual help and exchanges.

Jennie Timar is American but grew up in London. She joined the U.S. Army in 2005 as a translator but suffered a spinal injury. Today, as a disabled veteran, she fights to overcome her shoulder problems every day. Living in a van allows her to go biking, hiking and doing all sorts of outdoor activities to stay active and avoid pain.“I’ve been interested in road-tripping all my life,” said Timar, 42.

Timar has driven through six continents. In 2019, she drove her Mitsubishi Pajero SUV from Ivory Coast to Nigeria.

“This is all about one person’s journey,” said Timar. “This week, our van life community lost a wonderful influencer (Lee MacMillan). She took her own life after years of battling depression, and she had traveled with her partner through South America and Canada. Some people choose van life because of some trauma that they’re overcoming.”

Being alone is part of the trend, but loneliness may be causing issues from some vanlifers. There are cases of depression associated with van living, but so far the numbers are not proof of causation. The phrase “wherever you go, there you are” is true – especially on the road.

Timar built the interior of her van in 15 days.

“When I built the van, I knew it would be difficult due to my limitations. For example, I can’t hold the power tools above my head for very long, but I managed to build it all myself,” said Timar.

Like most van dwellers, she is happy to talk about everything in her home. Her van is called Prudence, after the Beatles song. The interior of Prudence displays many references to the Fab Four, including license plates that say “all you need is love” next to bright yellow sunflowers. Obviously Timar is a big Beatles fan.

As she points to the various objects in her home, her Japanese blanket, a memory of the four years she lived in Japan, is obviously a favorite.

“I’ve had this for 21 years. It’s a magical blanket. It’s kind of ugly,” she laughs, “but it’s so comfortable, so heavy, and even in the summer I can use it. It’s been to more places than most people.”

Prudence has no overhead cabinets, an important decision that Timar made early on. This allows her to lean against the walls to work or chat.

Billy Bosco, on the other hand, loves his cabinets, which he built with little input from friends and family.

“Everything here is pieces of wood I cut down myself,” he said.

Bosco, 25, is getting ready to leave in May on a trip through all of the national parks in the continental U.S. With a degree in Exercise and Sports Science from Texas State University, he works as a personal trainer and hopes to keep his clients while on the road.

Bosco decided to buy the van to chase a feeling he had when he first visited Big Bend National Park. During that trip, he and his friends hiked a 15-mile trail.

“We planned horribly! We bought like 1 gallon of water and a bag of peanuts to share. We had one sandwich each. In the first two hours the water and the sandwiches were gone and the peanuts were being rationed out,” said Bosco.

It was the end of the trail that proved to be a powerful feeling for him.

After graduating, he worked and saved enough money to buy the van, a Dodge. “When I started looking for a van, I realized I had a lot of options. You have Mercedes, you have Nissan, you have Dodge,” said Bosco, “and I just knew the Dodge was pretty universal, and that everyone knew how to work on the engine. So it felt safe to me.”

The decisive feature in the layout of his van was the table. He wanted to be able to eat and work on a table. If needed, however, the tabletop can be removed to give place to a guest bed – a common feature in many van layouts with a table.

Bosco’s favorite piece in the van is a commissioned painting with all places he’s visited. It shows the Great Walls of China along with buildings with minarets, pyramids and mountains. Of all the places he has visited, Pakistan is his favorite. He went there for a friend’s wedding.

“The cultural shock is immense, everything you do and see is so different all the time, but the people there were so friendly and so welcoming. I had never had so much fun in my life. I want to keep on traveling,” he explains.

With no official vanlife census and a community always on the move, how can the trend’s growth be measured or understood?

Causey explains that he’s routinely seen three groups of people in vanlife and skoolielife (a trend like vanlife, but with school buses instead): millennials avoiding big cities, families with young children traveling the country and retired people who just don’t want to spend their time in a lonely house.

“Of course, we’re in a brand-new demographic that never existed five years ago, so things are still developing. Essentially, what I have seen is a huge migration of middle class Americans who are abandoning big cities.”

Causey is emphatic when he talks about this movement.

“Honestly, rural America is booming. Every little town I know of in the countryside has everybody working to capacity. I see a migration of people moving from the big cities to rural America. A lot of people have gone home to families, because they couldn’t make rent or didn’t have a job during the pandemic.”

The most recent Van Life statistics report, from 2018, revealed that part-time and full-time vanlifers were almost equally split – 51% and 49% respectfully. After three years and a pandemic, those numbers may look a bit different now.

Since the pandemic began, vanlifers have found it difficult to find places to stay.

At least until 2018, most of them used spend the night in public lands (Bureau of Land Management), as Outbound Living reported in 2018.

Timar thinks that Texas is a great state to stay for a while. “People don’t realize we have 89 state parks in Texas. For $70 you can get a State Park pass,” she said, “and there’s also 24 safety rest stops, which is where I stayed last night, about an hour from Austin. And there’s security, there’s Wi Fi.”

Billy Blanchard and David Athier, owners of Austin Van Works, a van conversion company, guarantee that the number of van conversion shops and vanlifers have grown since the pandemic began.

“Yes, it was already trending before, but there was a definite spike over the last year that we witness not only in clients,” said Athier, “but also in builders. I think there’s like over 100 new van builders in the last year, which is crazy. Crazy.”

A quick search on the web points to catalogs like explorevanx and Curbed, which offer guidance for those seeking a custom shop.

Austin Van Works’ clients today come from many states. Athier said that before COVID their clients came mostly from Texas, but since the pandemic started, people from all-around the country have been reaching out to the shop.

The kind of people who look for shops like Austin Van Works are not the typical social media user, said Athier. “For a while, the first couple of years, the demographic was single, middle-aged women. That was probably 80% of our clients. And then it kind of mixed in with younger tech folks that can work remotely and have the money to invest in this,” he said.

The size of the investment may account for the older average age of the shop’s patrons. The shop delivers high-end cabinets, designs interiors with fine details, does the electrical and plumbing installation using good materials. The average cost for the conversion is around $70,000.

“Most of our clients are older, like between 40 and 70, some in retirement age. We had clients that were in their 80s. But typically, the people that you see live trending on Instagram and stuff is not really our client,” added Athier.

Without the backseats, most vans have practically the same layout: driver and passenger seats, a backdoor and a sliding side door. The fun starts as the small space is turned into a living space, decision by decision. With all the constraints, there is a variety of ways to turn the inside of the vehicle into a practical home.

The website rvingknowhow.com is a good introduction to some common layouts. The classic layout positions the bed at the back of the space, allowing the user to open the rear doors and access the space underneath the bed, which is most often used for storage. 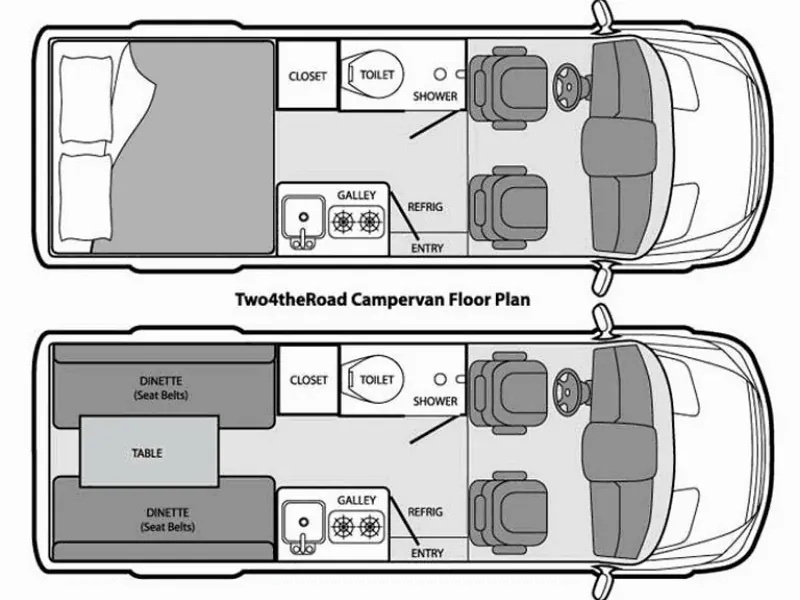 Isabelle Richard and Antoine Gagne, both engineers from Canada, maintain a website (hyperlink there) that has everything someone would need to know about getting into #vanlife.”

Filmmaker Zach Both also created a website that provides guidance and step-by-step instructions with time expectations for each phase of the van conversion process.

Commercial van sales data from the National Truck Equipment Association reveals that between 2013 and 2019 van sales increased by 56.7%.

The preferred models for vanlifers are the Ford Transit, the Ram Promaster and the Mercedes Sprinter. Of all the models sold in the past year, Ford Transit is the most popular, followed by the Chevrolet Express and Ram Pro Master.

Note that in 2020 the overall sales increased in August, likely driven by school vacations and the need to travel safely as the pandemic continued.

Some countries like Brazil would provide the perfect landscape for #vanlife, but political and social instability combined with the health crisis makes it a tougher environment. #vanlife is a trend more common in countries with relative social and politicaly stability, good weather, low criminal rates and good infrastructure.

On Twitter, a large number of #vanlife posts are in Japanese.

As more people are vaccinated and the pandemic recedes in the U.S., this trend that was boosted by it will most likely continue to grow.

We're not around right now. But you can send us an email and we'll get back to you, asap.